About the Colorado Kennel Club

The Colorado Kennel Club was established in 1901 and is the oldest kennel club in Colorado. As an all breed dog club, the CKC welcomes members of all purebred dog breeds registered with the American Kennel Club. Every year we host one of the largest conformation shows in the country with the goal of aiding purebred dog owners to achieve and maintain a high standard of excellence. During this show, we also offer obedience, rally, and agility trials, as well as barn hunt and dock diving. In addition we are strong advocates for dogs and their owners in our community and are members of the Federation of Dog Clubs, the organization dedicated to protecting these rights. Our Mission Statement was written in 1901, when the club was formed.

The objects of the Club shall be:

A. To do all in its power to protect and advance the interests of purebred dogs.

B. To conduct sanctioned matches, dog shows, obedience trials and performance events for which the club is eligible under the Rules and Regulations of the American Kennel Club. 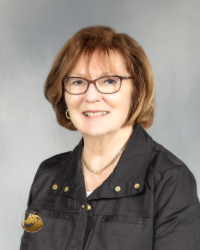 Louise Leone, Preident
Louise began her journey in dogs with a Miniature Schnauzer in 1974. Since that time she has owned , bred and exhibited Soft Coated Wheaten Terriers, Norfolk Terriers, Norwich Terriers and Border Terriers. She is best known for her owner handled multiple Best in Show Norfolk Terriers and multiple Best in Show Border Terriers.
Louise is very proud to be the President of Colorado Kennel Club, Show Chair, American Kennel Club Delegate. She has been a member of. Colorado Kennel Club since 1974 and has served as Secretary, Board Member and sat on the Show Committee holding several positions.
Louise is approved to judge Best in Show, the Terrier Group, Miscellaneous Group and Junior Showmanship. 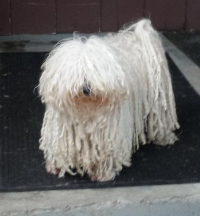 Carol Zemperini, Vice President
I have had dogs since the time I could walk, beginning with a Nonna’s unregistered hunting dog. Eventually I grew to love Hungarian Pulis, and they have become my breed of choice. My original Hungarian-born sire Maci (pronounced Motsy in Hungarian and means teddy bear) sired a litter in England by artificial insemination. That litter and its offspring resulted in Maci earning the Royal Canin Puli Stud dog of the year in England. He was 10 years old at the time. Two years later, I was blessed with one of Maci's grandson's Pahli, who turned 14 on May 22, 2021.
I also have a beautiful young girl named, Maci ( pronounced Macey in English) who was also sired from Maci (Motsy) by artificial insemination. I show her and after three weekends she is on her way to a champion like her father. He, however had obedience and herding titles, but she is a bit smarter and I have every reason to believe an even better herder. This younger generation, You know. 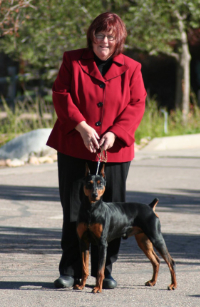 Charlene Dwyer, Secretary
I was born into a dog show family. My father showed Scotties as a young man. My parents got their first Kerry when I was 6 months old. Kerry Blue Terriers are our family breed and now we have German Pinscher’s!
Conformation is my focus.  I love our two breeds because they are free thinkers and always entertaining. 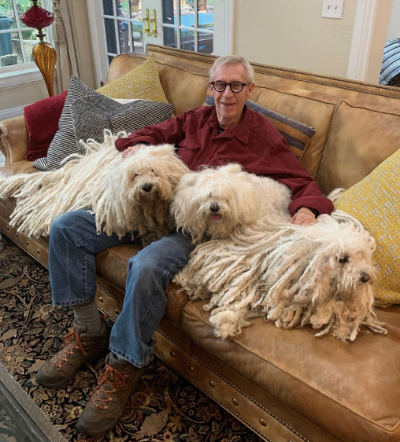 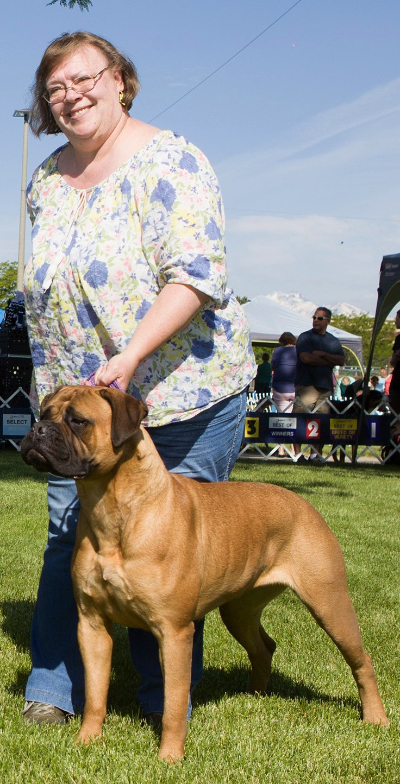 Melinda Shaffer, Board Member
My breeds are the Bullmastiff and French Bulldogs. I gave been involved with AKC purebred dogs since the mid 1980s.  I participate in all facets of AKC dog shows, including card kennel clubs, conformation and breed showcases.  I love the Bullmastiff breed and enjoy teaching people about this wonderful breed.  They are loyal, easy going and, with training, they make a great family dog.  My husband and I are involved in our community, volunteering as we are able.  We enjoy dog shows, square dancing and craft fairs. 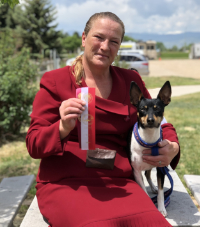 Terri Burns, Board Member
I have Rat Terriers and Teddy Roosevelt Terriers, but have had many breeds in the past growing up . I have been in purebred dogs most of my life, though I did take a long extended brake through my teenage years. I attend AKC conformation show. One day hoping to start some performance events.
One reason I love the rat terriers for is their short coats. I grew up with a lot of long hair breeds and swore I would never have another long hair breed Lolol ! A few of the other reasons that I love the rat Terriers is that they are very smart, loyal, protective, small and compact. A very diverse breed . You can fit four of them in a queen size bed and still sleep comfortably. 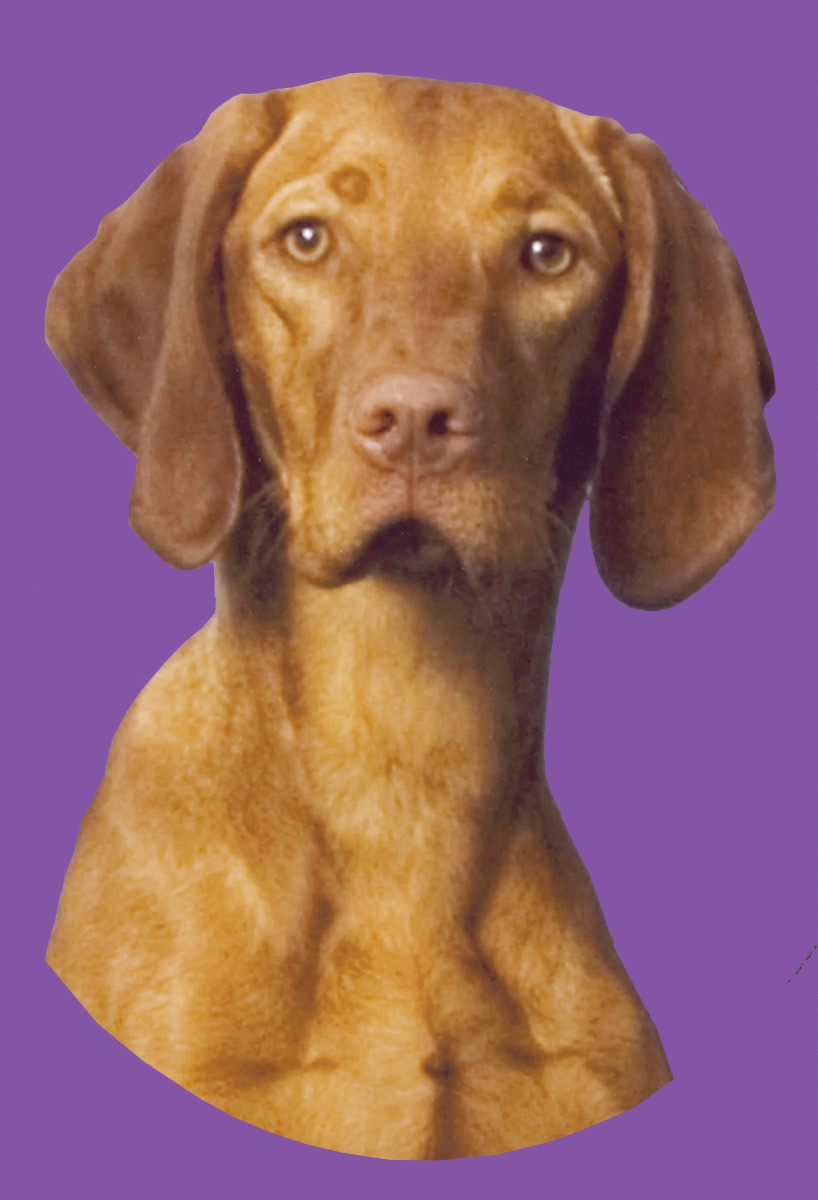 Dr. Sylvia J. Kerr, Board Member
I have owned, bred and shown Vizslas in conformation, as well as titling dogs in obedience, agility and hunt tests, since 1970. I am an AKC Gold Breeder of Merit and bred and exhibited the first AKC Platinum Grand Champion Vizsla female. I was approved by AKC to judge Vizslas in1992 and I am currently approved to judge the AKC Sporting Group, as well as several working breeds. I have been a member of the Colorado Kennel Club since 1990 and I am active in a number of AKC all breed clubs, as well as specialty clubs.
I enjoy and appreciate my Vizslas because of their elegance, exuberance and joie de vivre. 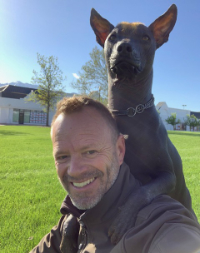 Troy Jensen, Board Member
I have been a dog lover all of my life. I believe having a canine companion brings not only joy and security to life, it is good for our health and our souls. Nearly 30 years ago, I was introduced to the Xoloitzcuintli and in 2014, I acquired my first Purebred Xolo from a breeder in Mexico. He is a standard size and one of the most amazing creatures I’ve ever cohabitated with. Two years later, I got my next one. And now I have five Xolos. My current goals are to breed responsibly and put quality Xolos with good temperaments out into both the pet and show world.
I am a member of the Xoloitzcuintli Club of America, a sitting board member of The Colorado Kennel Club and a member of the newly organized Rocky Mountain Non-Sporting Club here in Colorado.